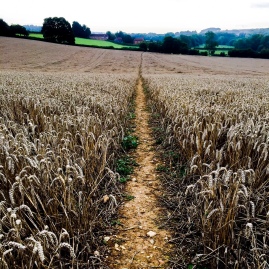 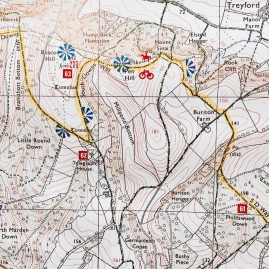 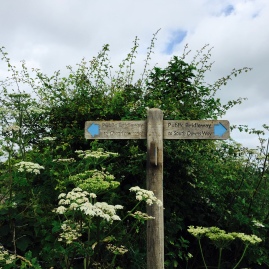 Baudrillard famously said ‘hence, the map precedes the territory,’ suggesting maps can conceptualise terrains and construct solid topologies, without needing to set a foot on the soil. Maps are representations, organisations, memorised directions reduced to icons, signifiers, scaled to two dimensions and arbitrary orientations. I have followed them for miles, I have been lost and delivered by them, tyrannised and seduced. I have struck up a bad boyfriend relationship with several: arguing, insecure, distrustful, angry and bargaining in turn.

A map changes a walk. It shifts the playful to the purposeful –  even if conceived for leisure – a destination plotted across grids creates expedient or scenic ways to achieve an end; there is a challenge, an outcome, a temptation to rush to the end, to the final result, a sense of competitiveness creeps in.

Maps contain many paradoxes – in order to find yourself, you have to know where you are: to read it, you have to be simultaneously outside it and within it. They provide freedom to explore while constraining your adventures; demanding you pay minute attention to the details of landscape – the trig points, footpaths, buildings, contours, sunken copses. Concentration requires energy; no time to stop and stare, or to loosen oneself from the demands of logic or ego.

As Baudrillard suggested, maps bestow assumptions. Following the broken green lines of a footpath circling a U shaped coombe on an OS map, it’s easy to imagine a bordered path, which in reality is a vague grass trodden track through a field.  Or to search for a bridle path to one’s left, only to be confronted by a narrow gully bearing dog leg fashion between hedgerows. When Columbus first landed in Cuba in 1492, he thought he was discovering part of mainland Asia. He refused to believe the indigenous people when they told him he was on an island. The information conflicted with the naval charts drawn up by The Admirality. They had to be mistaken.

When walking, the view from the map is vertical: a slow goose shake of the head, up and down, down and up, finger tracing bridle paths, losing and finding your place as you estimate distances, your footprints a pedestrian camel train on the track, your rhythm interrupted by stops and starts. No time for introspection or to follow loose and lovely chains of associations. The map leads you blindly, concentrating your attention to the middle, the monocular, urging obedience. You can argue with its despotism, despise its democracy (all codings hold true, whatever the reality of the path), the neutrality of space described, and ache for something more from the flapping pages and folds worn to hole. You may even glance across lovely hills, coppery with chestnuts on the turn, and feel overwhelmed with an urge to deface it.