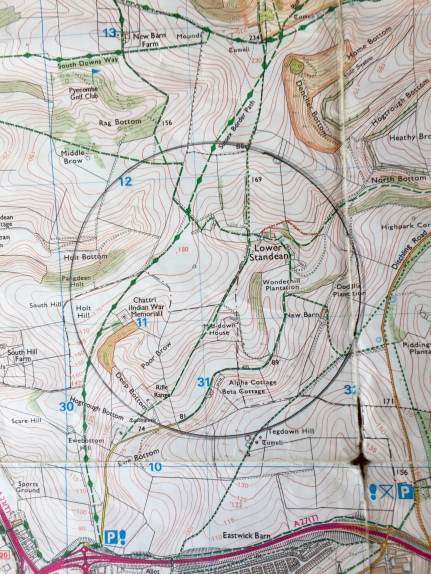 A favourite Letterist trick to promote random and playful ways of walking was to place a glass down on a map and draw around it and walk the perimeter. Using an OS Landranger 198, I set down an IKEA glass, drew around it with a pencil, cutting across broken green lines and the spiny contour lines of Scare Hill, Flint Heap, Rag Bottom, Granny’s belt, Holt Bottom, and set out to walk the line.

In the fields above Braypool, green fields rise gently, dissected by chalky white lines studded with grey flint. Below me, Brighton glitters, the thin steel pencil of the i360, rudely jarring the landscape. It’s not yet 8 a.m., I walk through fields of silvery grass, yellow heads of ragwort and groundsel. A plane banks round on its descent into Gatwick; the horizon and sea a bowl of blue. On R4 this morning, a film director, talking about filming in winter said: ‘the hardest thing to fake is sunlight.’

I’m happy to be alone; but anxious too, a physiological response to open space, making me alert to the slightest sound and movement – I am one of those people the BBC refer to when they say: ‘look away now if you have a nervous disposition.’  In line with the circle, I keep to the left of the Chattri – the Indian Memorial, dwarfed by the copse of sycamore and beech. Cows nudge against the wire fence; hawthorns lean, braced to the wind and in the valleys, red tiled roofs dot the folds. I walk past a noticeboard, through a silvered wooden gatepost, feeling like a Head Girl, wanting to do it right; take notes, remember, pay attention, and in doing so I’m sorely aware I am missing it.

The circle means heading off the footpath into the long grass where the walking’s harder, the long grass long slaps my legs, bigger strides are needed, the ground is springy and uneven. I walk until I come to a fence, a gate marked: PRIVATE LAND. Through the wooden slats, fields of dark green wheat following the curve of my circle. There’s no-one in sight to witness any acts of civil disobedience, so why do I submit meekly to the sign’s authority, skirt the fence back to the footpath, feeling annoyed, ashamed of my timidity? It is so much easier to be bolder in company, it’s why pilgrims travelled in gangs.

Finding my way back to the circle means climbing another fence, walking straight on until I hit the footpath. The problem with following a line, is that I have no bearings to tell me where I am on the map. Either side, the chalk path is bordered by shoulder high cow parsley. Two middle aged joggers pass me, red faces shiny with sweat, too breathless to speak. I can tell a walker’s gender from miles; the size and shape, speed and gait as it approaches. I am always relieved if the walker is female, though it’s rarely the case.

The path crosses another footpath. The fields are unfenced. Theoretically possible to walk the rim of the circle, but the verges are overgrown with thistles, brambles and nettles. Again, I retrace my steps and follow the lane into a valley, where for the first time this morning, the drone of traffic disappears. The downs rise like green walls. Sheep graze and bleat.  I am alone. I take the chance to have a wee in a small copse of hawthorn. As I pull up my jeans, a young man wearing a Bush hat appears from nowhere, (I could pee on the moon, and find life).  He jumps, as do I, then realizing what I’ve been doing, looks embarrassed.

‘Good timing,’ I say, walking past.

Rebecca is a big fan of the Shewee when walking, though I don’t understand what difference it makes, coopying or standing, everyone still knows you’re having a wee, ‘It’s not like anyone can see anything,’ I say. 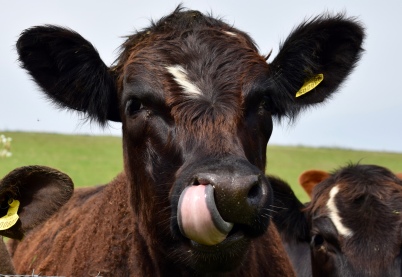 At the bottom of the valley, the track turns to tarmac.  Two men wearing cotton gloves stand bend over a pile of rocks, sorting flint. They say hello without looking up, their casual disinterest is comforting. A flatbed Mazda parked on the verge has the registration: FLINT8 which makes me smile. I cross the tarmac, over Wonderhill Plantation, climbing again. A herd of cows huddle around the gate, swishing tails, stamping, snorting and shuffling. Two weeks ago, a professor in Guestling was trampled to death by cows. I remember a story Dee told me about walking by the Avon when two heifers charged from behind a bush, ‘it was as if they’d planned it,’ she said, ‘like they’d been hiding, waiting.’  Dee thinks cows see you at least ten times bigger than you are. Instead of retreating she waved her arms over her head and lunged at them shouting Moooooo… . but I’m not that brave. I retreat, detouring further along the road, before cutting back up Poor Brow. Sussex Rampion grows on the hill, its small mauve-blue head delicate as an anemone.  80% of young people under 25 don’t know the name of a bluebell, and only 10% can recognize a primrose, according to the news. In a similar vein, writers have written to the Oxford Junior Dictionary about the latest edition which has cut over 50 ‘natural’ words, including: catkin, cauliflower, chestnut and clover – replacing them with broadband, cut and paste.  When I Tom and I first got together, we walked around Cissbury Ring with his kids. They didn’t know the name of a daffodil or that an acorn came from an oak tree.  Tom thought my indignation was funny.  ‘What does it matter?’ He said, ‘it’s just a name.’

I couldn’t explain. Naming something is the beginning of knowledge, comprehension, the precursor of application and evaluation, ‘ if you don’t know the name of something, how do you know whether its poisonous, it’s a question of survival.’ I argued.

He sucked on a piece of glass, handsome, infuriating in his Raybans and Chinos, ‘They can Google it if they want to know….’

Poor Brow leads back to the path where I started, to the noticeboard reminding me to keep dogs on leads and pick up litter.  The smell of bacon frying wafts up from the van parked  on the lay-by. It’s gone 11. I’ve walked five miles. Men with neat haircuts and ironed blue shirts carry paper plates of bacon butties and cups of coffee to their cars where they eat, staring out of their windscreens.  I retrace my walk on the map, its lines reduced and squeezed to the shape of a letter B, curtailed by private access, cow-phobia, unwalkable verges and overgrown paths. But you wouldn’t know that, if like the men with their bacon butties, you sat in your car looking out at miles of fields and rolling hills, the illusion of space and entitlement remains blissfully in tact.